Hi everyone and thanks for coming back to read over what I have been up to.  I have written previous posts in the past about attending arcade events, both of my NERG 2016 and PLAY Glasgow 2017 write-ups can be found by clicking on the links, but despite attending other events since then, I held back on writing them up, as I feared it may be seen as a simple regurgitation of previous posts.

However, this year, saw me attend NERG 2018, last weekend 14-15th July 2018, and I had a blast, but I also had a slightly different perspective and reason for attending, so I thought it was worth another post. It’ll be pic heavy though, so as always, get a hot brew, a biscuit or two and settle down for the next 5 minutes.

For those unfamiliar with NERG, it stands for North East Retro Gaming and is a yearly event, (2018 saw it’s sixth outing), held in Gateshead. The show is the creation of organiser Phil Murphy, who pours his blood, sweat and tears into making the event not only happen, but be the bloody great event it is.

Phil is supported by James of Retro Games Party who supplies the majority of arcade cabinets, bolstered by fellow hobbyists, keen to support Phil and his team, by bringing their own personal cabs to the show. There is also a great selection of pinball tables, laid on, mainly, by both the Northern Lights Pinball Show and the Scottish Pinball Association. In addition to this there is an amazing array of consoles from yesteryear, supplied by Retro Events. Throw in a decent smattering of stalls, with traders touting a wide range of retro gaming inspired merchandise and even a bar selling NERG branded beer, it would be difficult to attend and not thoroughly enjoy yourself.

The event was again at the International Sports Stadium at Gateshead, which is a good location with plenty of onsite parking and an okay restaurant should you need to refuel in between sessions and was spread across both Saturday and Sunday, with doors opening to the public at 1000hrs.

However those, including myself, lucky enough to have early access, were able to get in prior to opening and to have a look around before the hordes of excited gamers were unleashed into the arena. And so, with camera in hand, I set about trying to photograph some of the main areas inside the main hall.

In my previous posts I have documented the friendships formed during/through events and the camaraderie found between fellow enthusiasts was evident again this year.

A small group of us, chose a new line up to James’ cabinets, an upright version of Sega’s 1981 release, Turbo, to have a high score competition on throughout the weekend. A popular racing game of it’s day, it is definitely not without it’s faults, but I did like the cabinet, with the score table being situated to the left of the screen area in a LED panel.

But it was the friendly(ish) banter that built up within our group as high scores were traded between players, with cheers that could be overheard from the other end of the hall, when a score was beaten, that turned an average game, that may otherwise be overlooked for its successors, into one of the games of the weekend.

But my goal this weekend, did not relate to arcade games at all. My objective this year, was to get stuck into the pinball side of the event. Why? Well, let me explain. As a youngster, I was never in to pins.  I can’t really give any kind of reason for this maybe it was because; my local places such as cafes, chip shop, etc, only had arcade cabinets; or the travelling fairgrounds that filled local fields during holiday periods, never had any pins; or equally likely, when I did find one, knowing nothing about the table, it would quickly eat my money, leaving me feeling that I could get a far better return on the more familiar arcade games.

And so it was to the pinball section that I went and where I spent the majority of my time. Here are some photos taken early on Saturday morning. 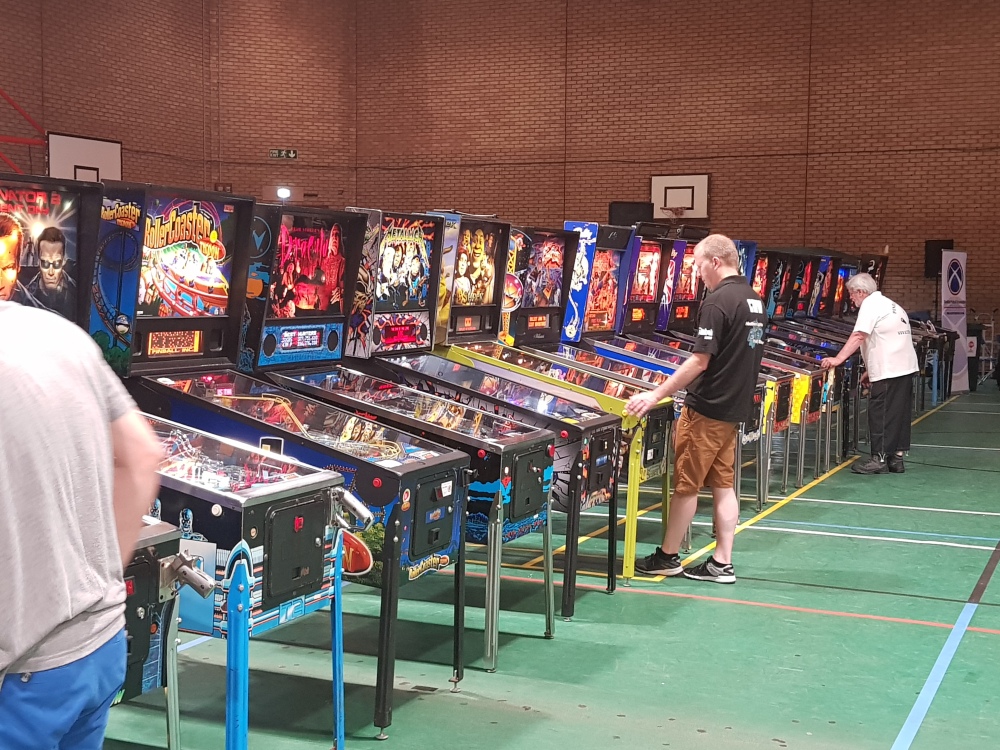 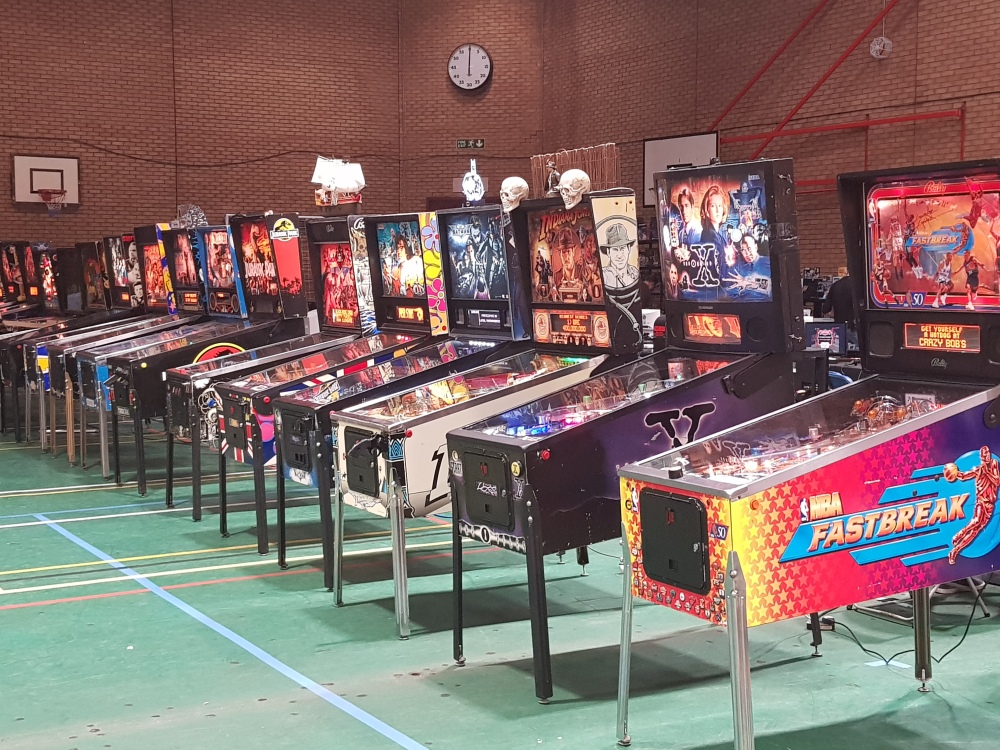 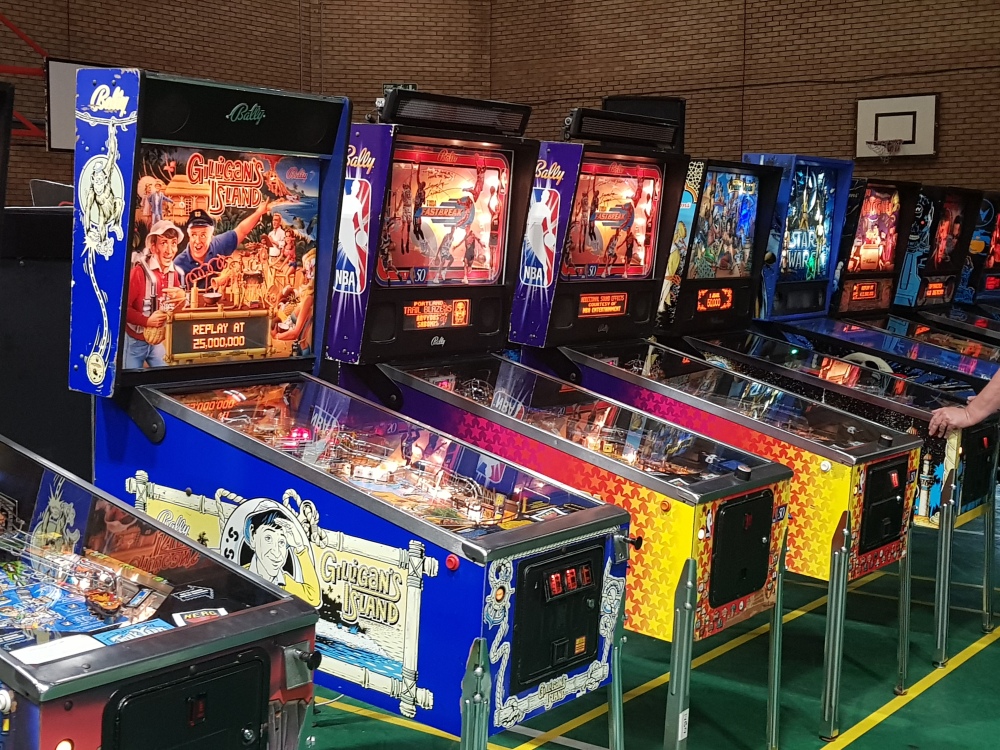 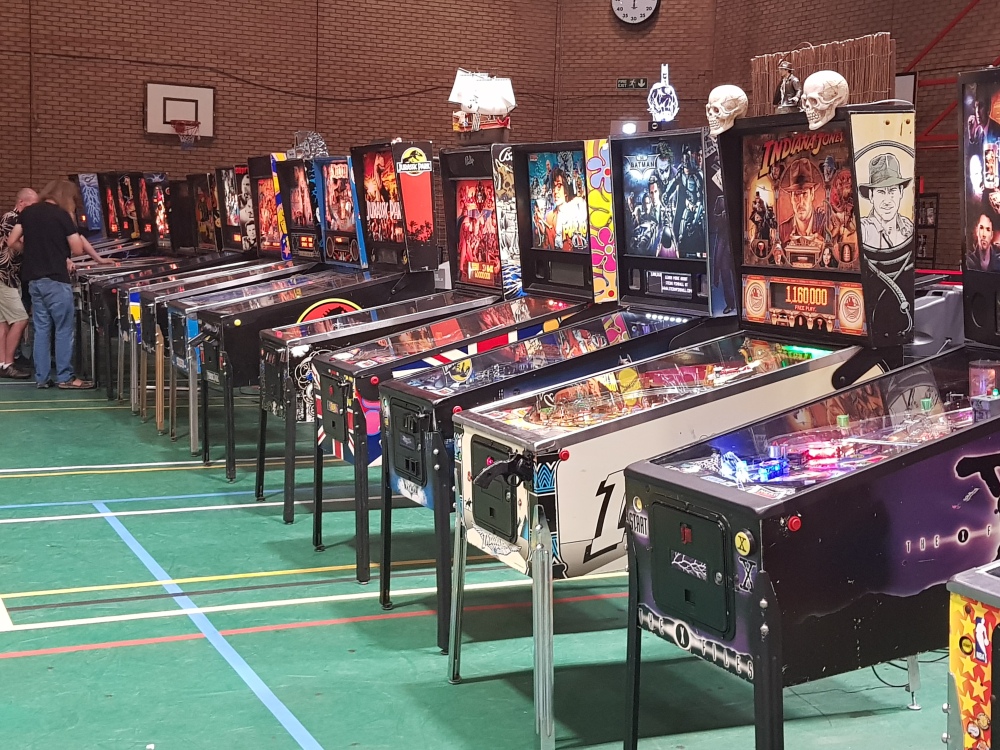 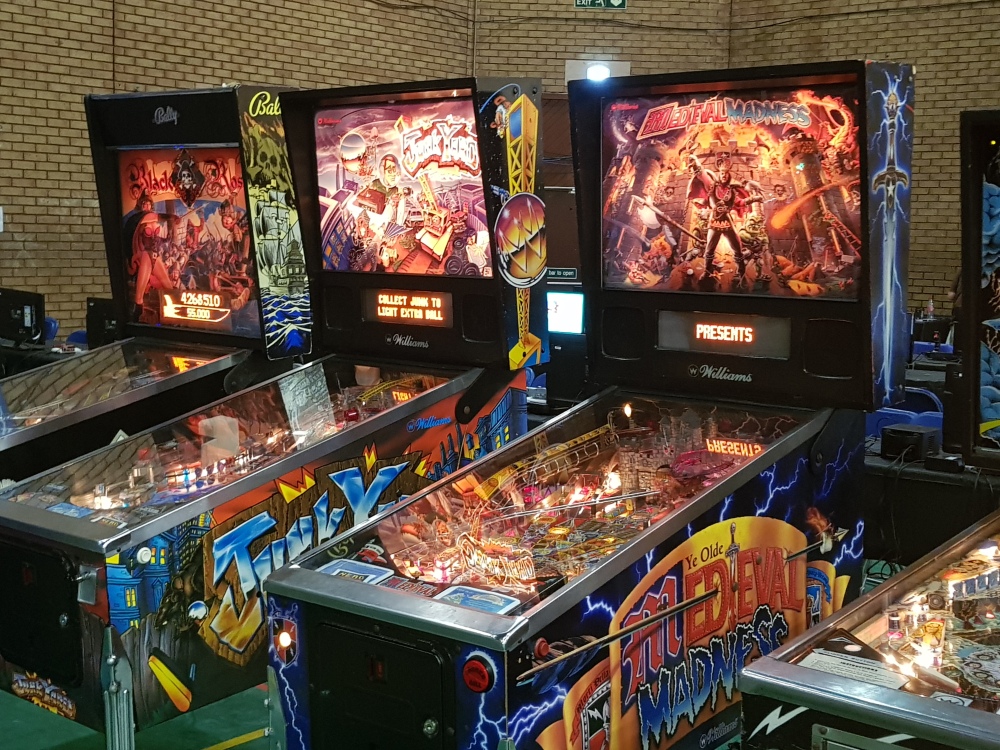 At any event, pins always seem to pull the crowds. There is always someone playing each table and usually, at least one other waiting to play, on the more popular tables. The sheer price of pins put them out of the reach of the casual player, and they are found less and less in the wild, leaving events like these, the only realistic option for most/many. And Nerg certainly did not disappoint in its selection of tables with approx. 40 tables provided to pop my proverbial pin-cherry upon.

I don’t intend to talk about every table here, mainly because I really don’t know that much about any of them, but also it would take a blooming long time, so for the majority I will let the photos do the talking, highlighting a few of my personal favourites as I discovered them.

Thunderbirds – I think I am right in saying that this is the first time this table has been seen in the UK, maybe even Europe? So a great scoop for Phil to have this on the floor at NERG. I think that some of the ramp entries were still prototypes and as such may need some tweaking as the ball did seem to jump about quite a bit, but I really liked the table, great artwork and modelling, with varied missions to complete against the clock, etc. Didn’t play it much as, understandably, it attracted quite the crowd/queues. 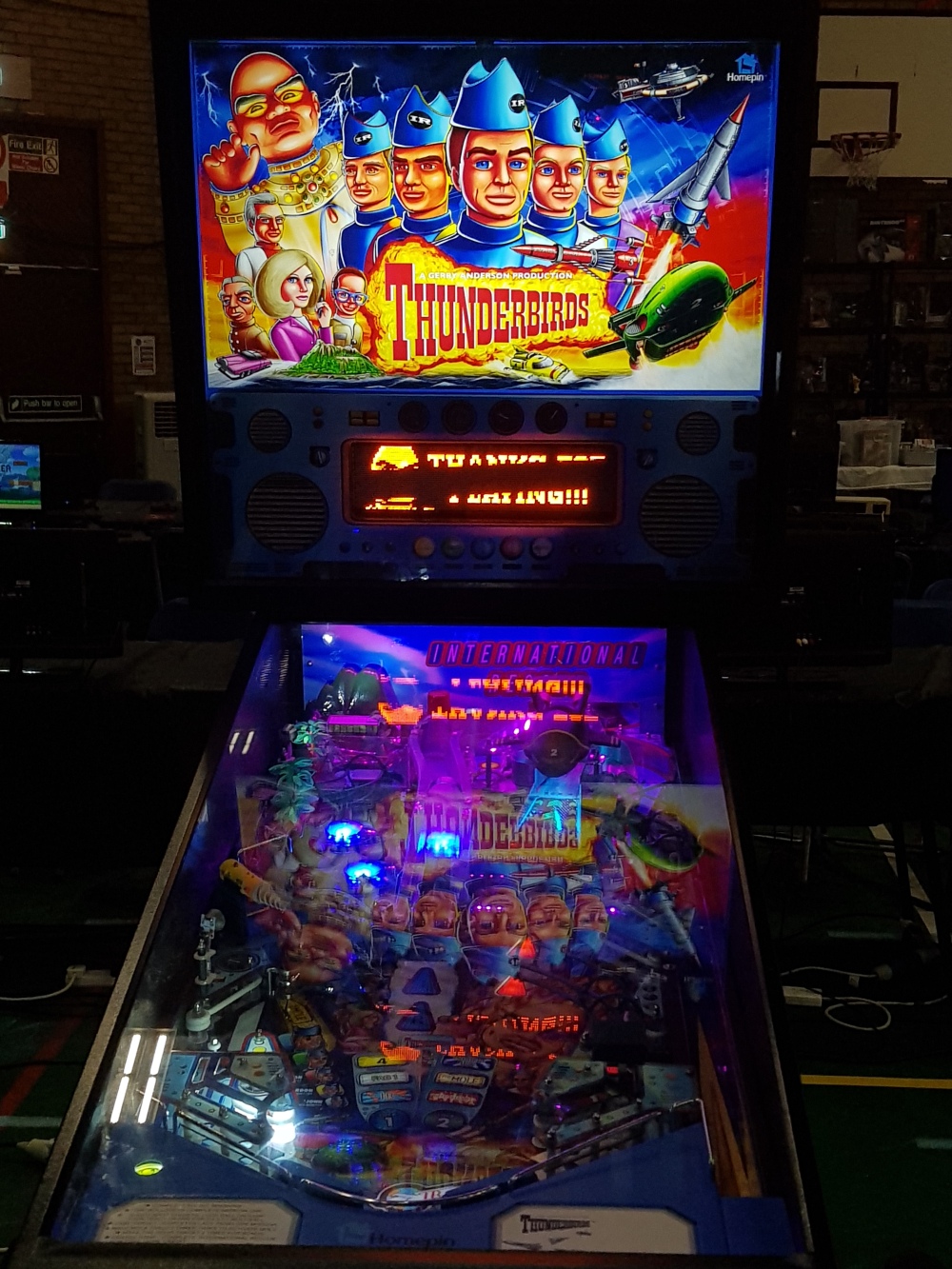 Indiana Jones – personally a great theme for me, as I’m a big fan of the films and the table just shouted out in 80’s splendour. I found it hard to make much progress with this though, probably down to me being rubbish than the table itself, meant to try and give it more time on Sunday but just never got round to it.

Jack-Bot – I’m not sure if this table is based upon some actual thing, book/film/game, but I really liked this table. A great selection of mini-games relating to various gambling themes, there was a lot going on and I definitely felt that I got my hypothetical money’s worth when playing. You also had to be quite skilled in your ball action (ooer missus) to hit the coloured bumpers in the right order/sequence.

Demolition Man – Mixed feelings with this one for me. The table undoubtedly had a lot going for it, ramps everywhere, game selection feature, etc, but I just don’t like the secondary flipper handles, they just feel awkward and detract from the playing experience as opposed to enhancing it. But this is just my opinion and the game itself was a lot of fun. 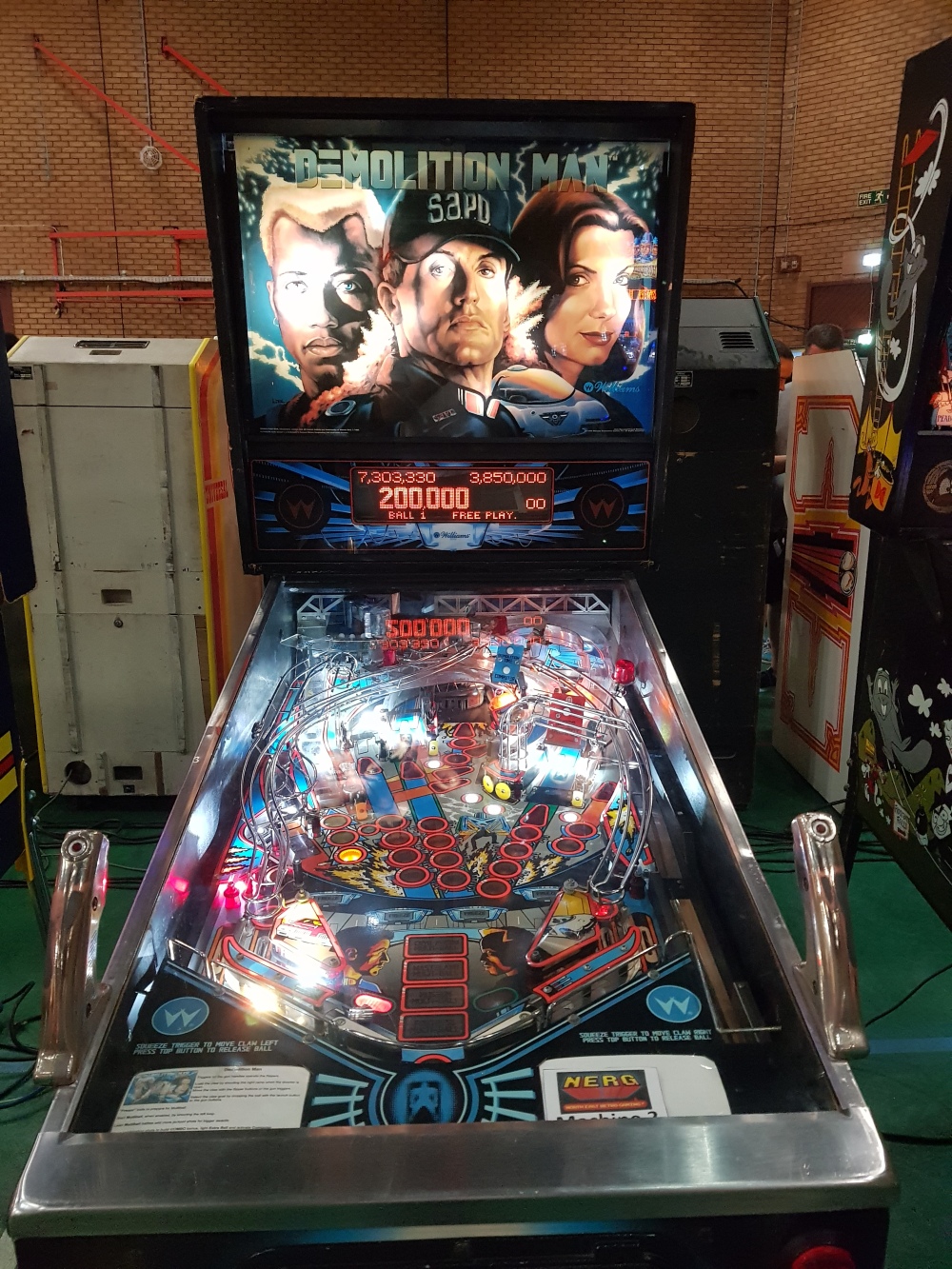 The Flinstones – Another table that just appealed visually. Big fan of the original cartoon from my childhood and the sound effects and musical quips were a great throwback to the TV show. Only had a quick go on this to be fair, but it played nicely. 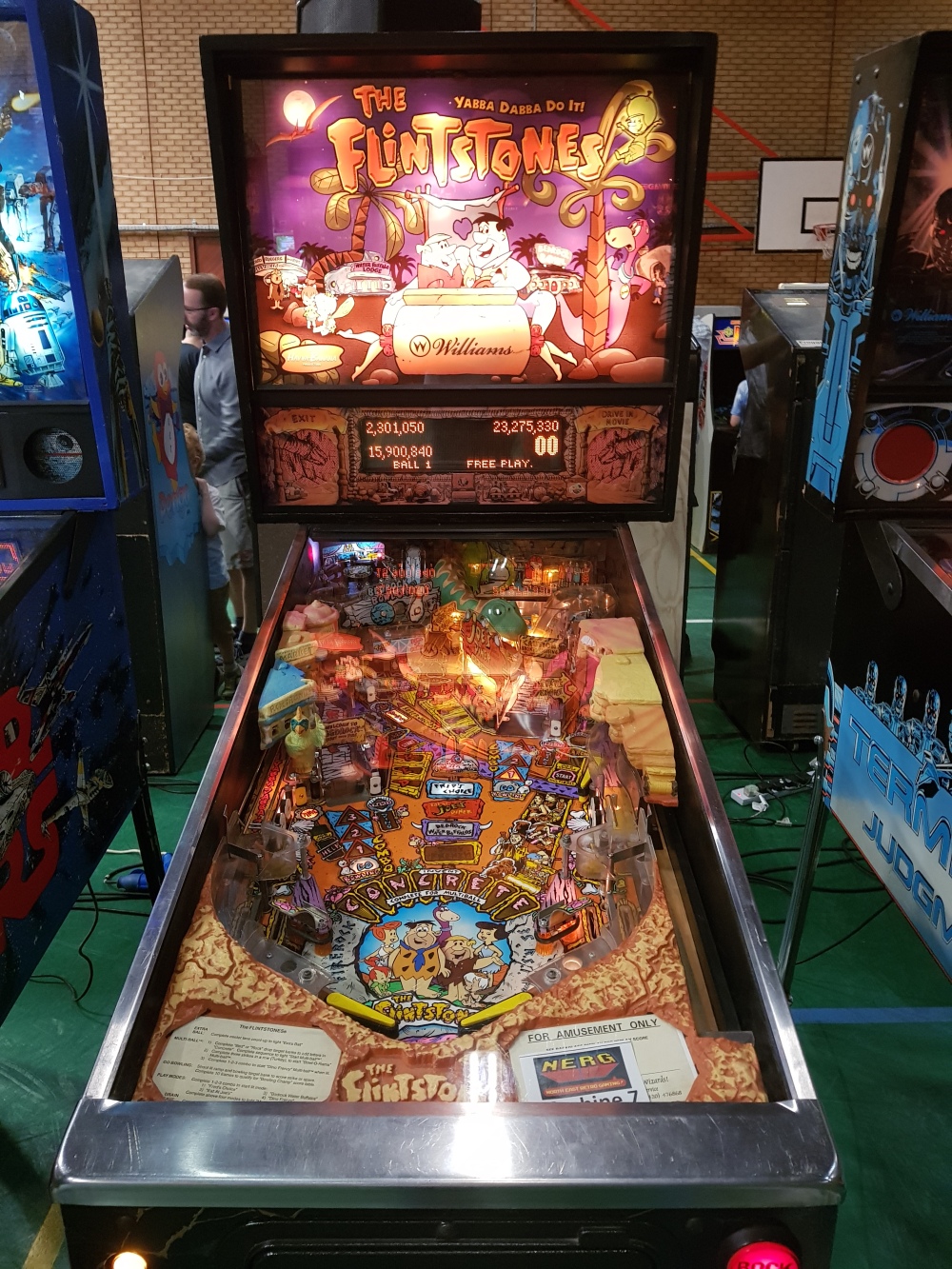 Batman – Another great looking table, but I just couldn’t get on with it. Likely me as opposed to the game. I wanted it to be great but for me, it wasn’t. Shame as it looked bladdy brilliant.

Jurassic Park – Another table, which sees me as a great fan of the films, just playing this with an inane grin across my entire face.

Sopranos – this table is the opposite of the last few, as I have never watched the Sopranos on TV, so whilst the nuances of the table were lost on me, I felt that this table played really well. Lots to do, you really felt that every ball was going to hit something or start something on the DMD. I have quite a few goes of this and loved every ball played. 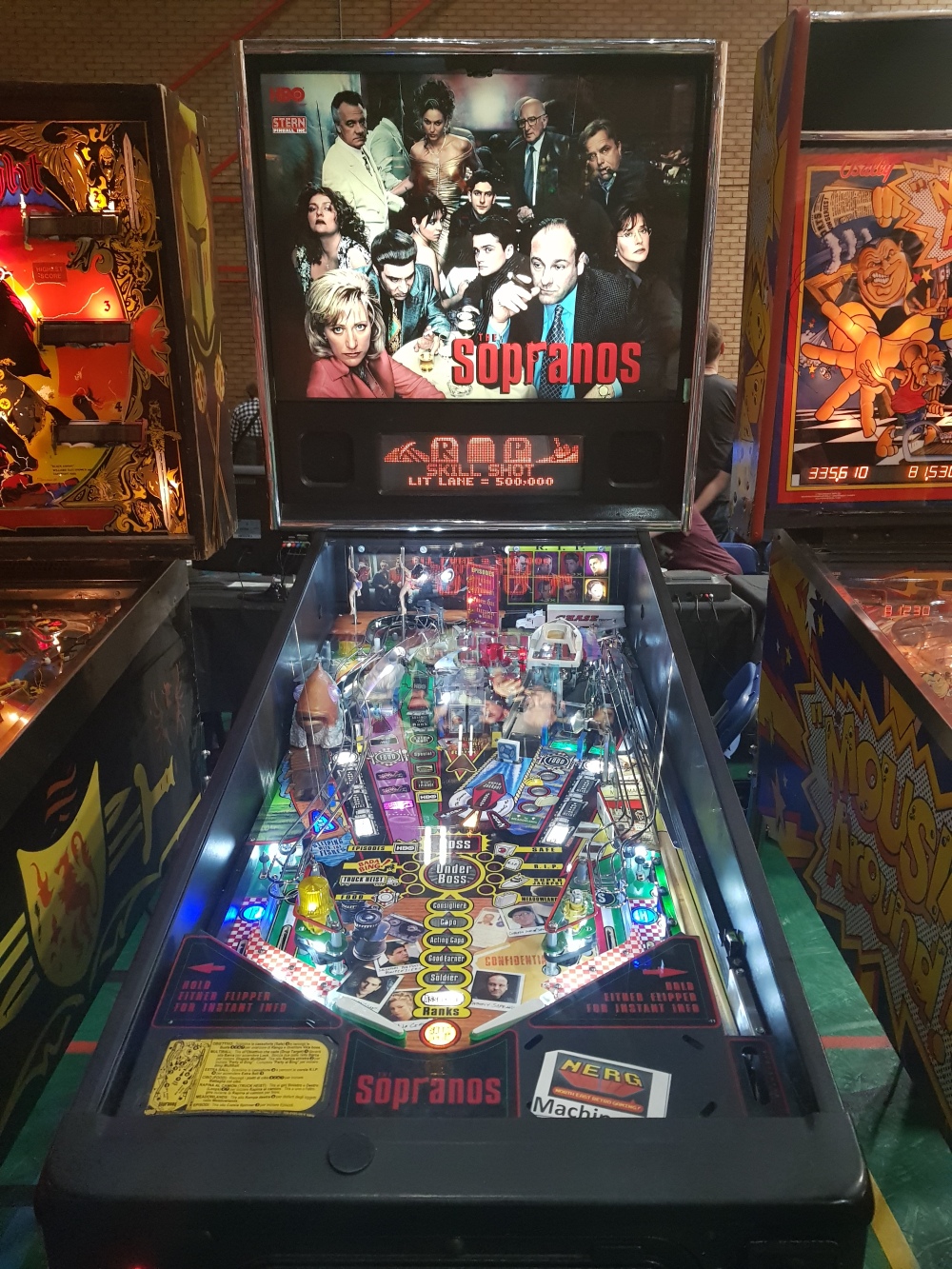 Junkyard – this is a table that I had never heard of but one of my friends thought it to be quite popular in pinball circles. And I have to say I liked it. I thought the space at the top of the field was a bit barren, and you simply waited for your ball to roll back down to you, but the games on the DMD were particularly amusing. 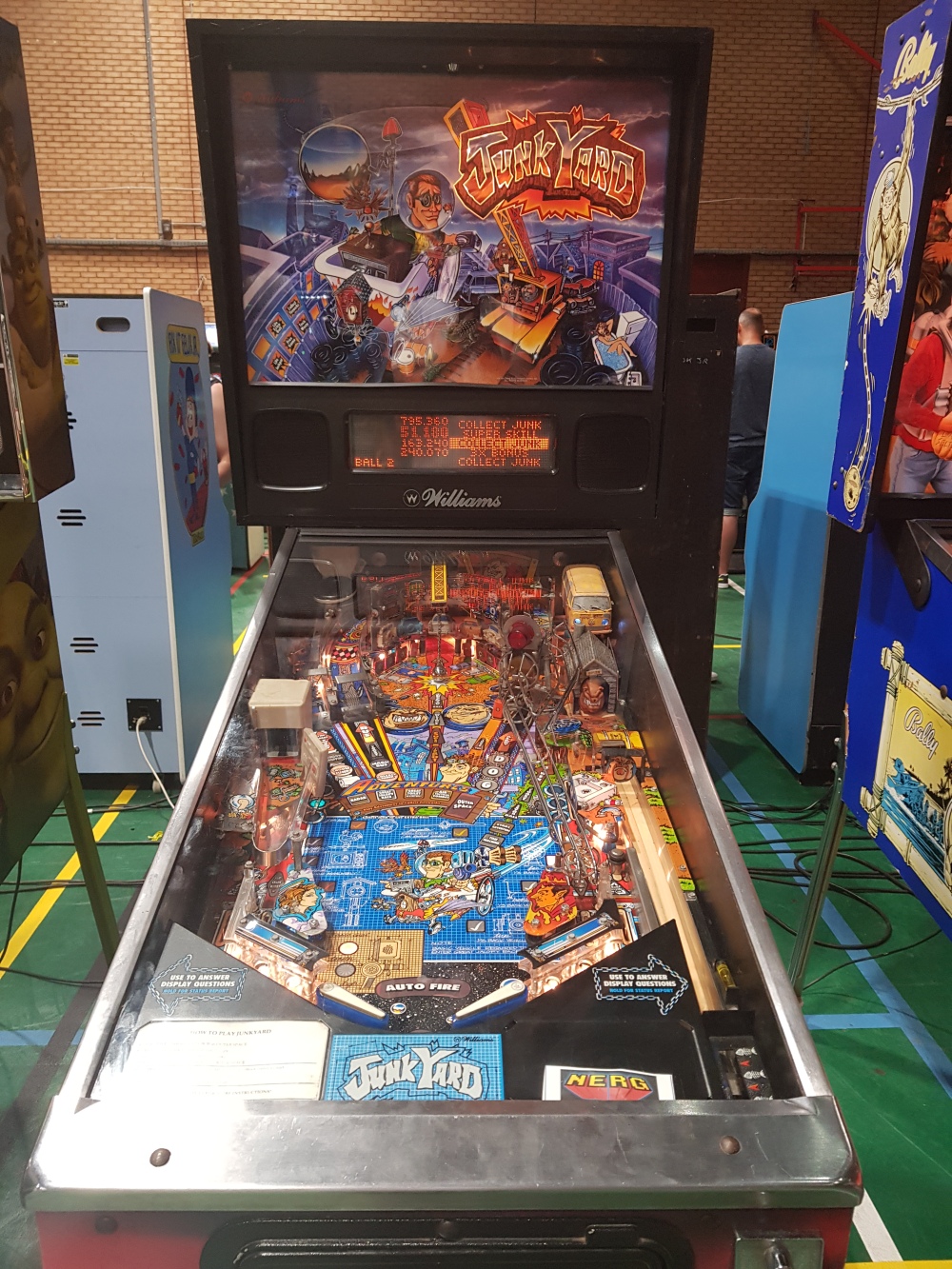 There were many, many other tables, Metallica for one seemed incredibly popular and I never got on that table. The only slight downside for me, is that it is difficult to hear each pin over it’s two neighbours and although, when I was speaking to some of the tech guys, they said they would turn the volume of a specific pin up, it would be great to hear each one on it own, especially those based around rock groups, etc. But of course in the home environment, this would not be an issue.

So what next? Well I know at least that I really do want a pin. Which one, I don’t know. I don’t even know if I should choose one and seek it out, or just wait for a decent table to come up and just go for it?

What I do know is that I need to get my games room finished and my other projects, of which there are a few, finished first. But in the meantime to get my toes wet I joined up on www.pinballinfo.com, after speaking to a few knowledgeable chaps on the floor, and everyone on there seems friendly enough.

I made some new friends at NERG and thoroughly enjoyed myself. And whilst I really, really want a pin table now, there were some other standout machines at the event. Here are some personal favourites, which you may have spotted in some of the earlier photos..

And so that was Nerg, with only enough time left to sample the liquid refreshment, before I collected a console and games I had bought earlier, it was time to thank Phil and start counting the sleeps until 2019!!

That’s it guys n gals. I had a blast. Thanks for reading through this. I hope I managed to catch some of what NERG is about, but of course the pictures don’t catch the atmosphere, which, once the place is full of like minded enthusiasts is (not only warm) brimming over the edges. So instead of reading about it, get yourself there next year. And if you see me, say ‘hi’.

Thanks Phil – you pulled it out of the bag. Again..

PS: Any errors in any of the above are mine and mine alone. If I misquoted, I apologise.